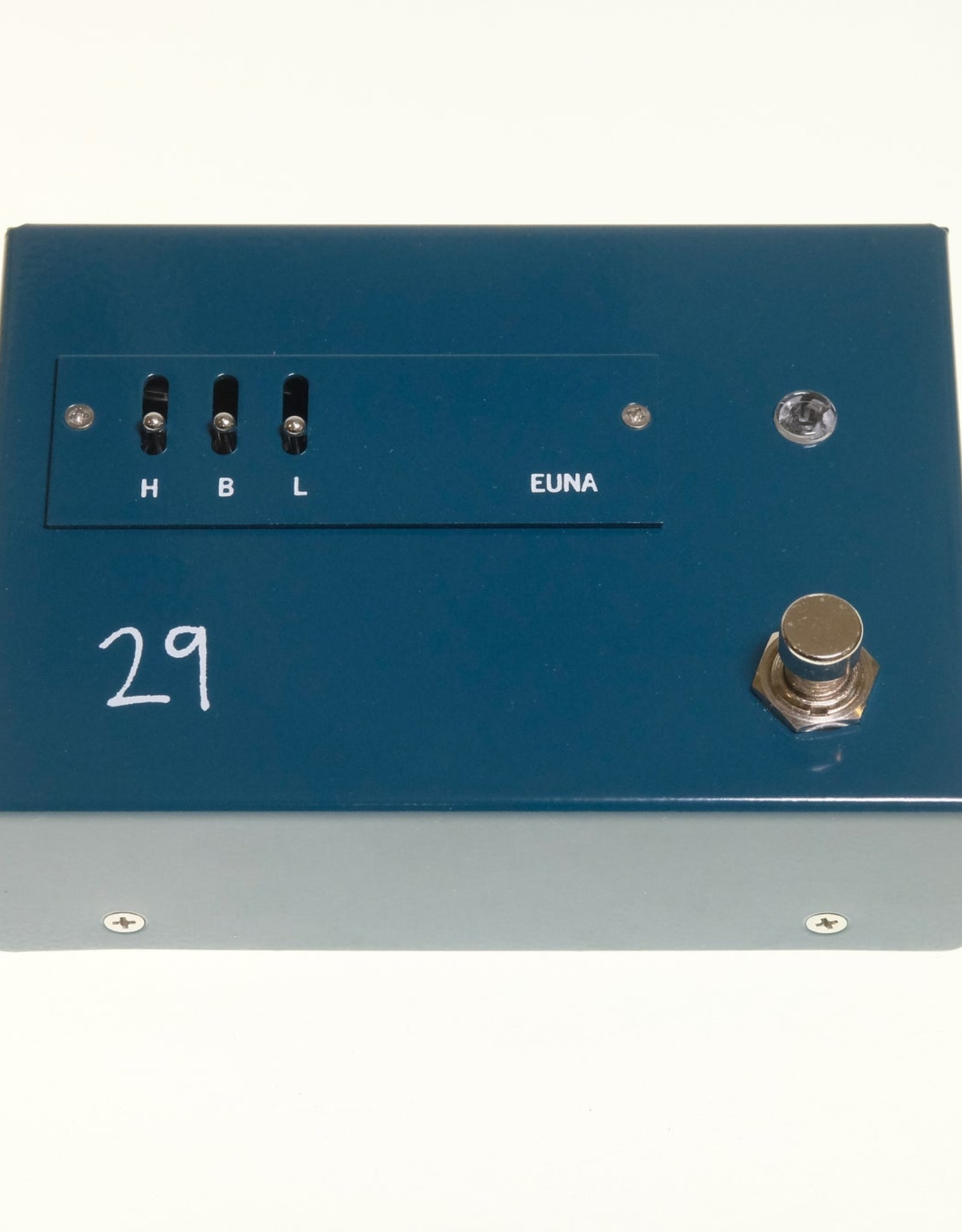 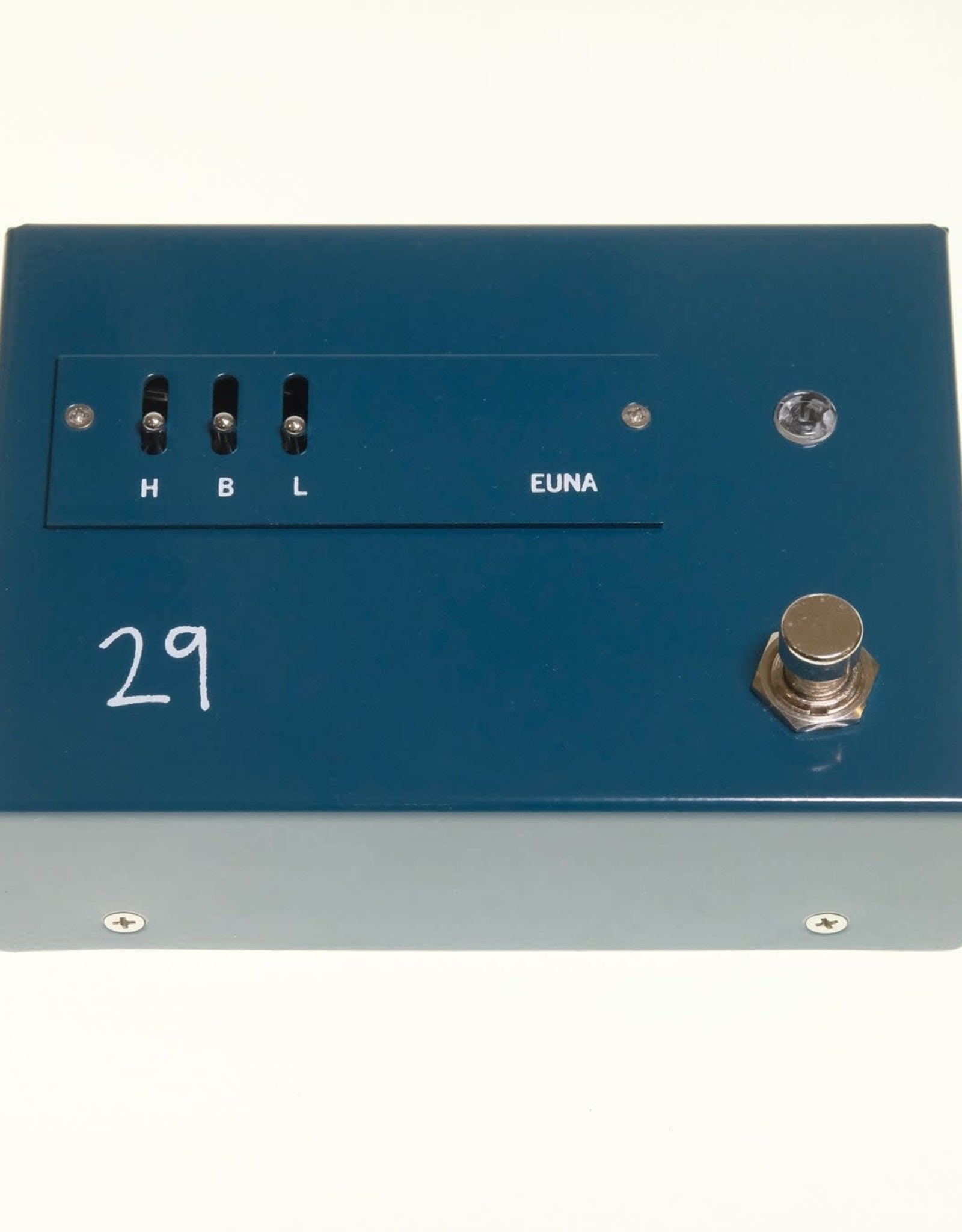 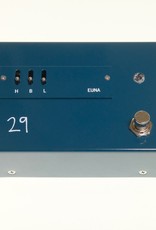 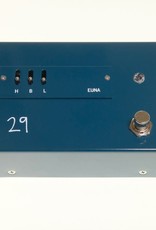 EUNA is the Elite UNity Amplifier from 29 Pedals.

An input driver that replaces a conventional buffer, EUNA is built to protect and condition your instrument's signal to prepare it for whatever you want to do with it. Console grade build, three great sounding filters, and an alt-path insert loop for your classic fuzz and wah circuits that don't want to be buffered. Also features the 29 Pedals WHATEVER power supply, which accepts 7.5 to 35 volts of AC or DC in either polarity with no change in tone. EUNA is made by 29 Pedals in California.

Even a few true-bypass pedals and 20' of cable can hang out your guitar's output and make it feel mushy and dark. Buffers can help, but they are often very simple circuits that create sonic issues of their own.

EUNA is an Elite UNity Amplifier. It is designed to protect and condition your guitar’s signal. Use it in place of an input buffer. Plug directly in, first in the chain. You can safely remove all other buffers after it if you wish. We recommend an output driver at the end of your chain. You can use a conventional buffer, or try our output amplifier OAMP. Plug your guitar directly into EUNA with the shortest cable that is convenient.

EUNA features an effects loop that activates when EUNA is OFF. It was designed for use with vintage or vintage-style fuzz pedals. The interaction between your guitar and your fuzz is disturbed by any buffering, so EUNA’s effects loop allows you to switch between a buffered input and guitar-direct-to-fuzz. You can also use the loop to remove your tuner’s buffer from the signal chain. Let us know what other uses you find for the loop! If nothing is plugged in to the loop, the pedal is true-bypass when switched off.

EUNA has three sweetening circuits - Harmonics, Bright and Low. Low adds a little bit of low end. Not too much, just a little bit for some sweet oomf or to make up for low-end loss in your pedal chain. Bright adds some brightness, and Harmonics pushes the air band where guitar harmonics are. Harmonics adds sweet, tube-like chime to any rig.

EUNA preserves "touchyness" and "snap." There is also an increase in effective dynamic range of your signal, and in some cases coil noise is reduced! The custom-tailored load kicks the resonant peak of your pickups out typically about 5 or 10k compared to a load of a few true-bypass switches and reasonable cabling. The pickup’s top-end rolloff is smoother too. You'll feel more chime and less pinchy top-end.

EUNA will take over +18dB input with extremely low THD* - many other pedals fold about +10dB or less! The extra headroom on the front end means that EUNA will pass through your entire signal. That extra headroom means that fast transients won't ever run out of room - no relatively normal electric guitar could clip this, even for an instant. It's absolutely flat from 10Hz to 50kHz, but all the above features create a perceived tone "sweetness."  EUNA can be modified to accept up to +22dB!

Connect power to the WHATEVER power input with a standard DC plug. You can use AC or DC, either polarity, 7.5 to 35 volts. EUNA consumes about 100 mA.

Use the footswitch to engage or disengage EUNA. The light is brighter when EUNA is ON. When EUNA is OFF the insert loop is ACTIVE. If nothing is plugged into the insert loop, EUNA will be in True Bypass mode when switched off. You can connect a pedal to the Send/Return jacks. Connect SEND to the INPUT of the pedal you want to connect. Connect RETURN to that pedal’s OUTPUT.

EUNA is very DIY friendly - the Opamp is socketed so you can very easily audition chips. Notes on the PCB will help experienced DIYers tailor EUNA completely to their rig. EUNA will drive down to 600 ohms perfectly flat, but there are a few places tweakers will delight in hacking. Remove only 4 screws and you can service/mod the entire audio path without disturbing the power supply side or removing the board from the chassis.

The construction is a single 4 layer PCB with 2oz copper throughout. Huge traces and fully plated holes, like high-end recording equipment and hifi gear. This method provides superior fidelity and transmission. No jumper wires, fewer soldered connections, shorter paths, more copper. The power supply side is completely isolated from the audio side with a layer of shielding and separate ground planes connected at a single point in a proper star-ground configuration. No electrolytics in the signal path, only for PSU filtering. 1% thin-film resistors, WIMA film caps and other audiophile-grade components complete the short signal path.